Why on earth do the print art creators who belong to Shinobazu Gallery, such as Junji Yamada, use such extremely complicated techniques in their works? In fact, one of these artists, Rieko Fujinami, creates works using her own techniques which are said to have a relatively high degree of difficulty, which makes me raise the above-mentioned question. However, let me omit the details of her methods from this article since I have not yet understood them completely, though I receipt explanations about them from the staff of the gallery. Nonetheless, as shown in her earlier creations which can be seen in the display cases in this exhibition, we may guess that she has created these unique techniques with the aim of expressing what she wishes to convey viewers through her works at that time. There is a big difference of impression between that of her previous creations, most of which were created based on portraits and that of her new pieces shown in this exhibition as if they were created by different artists. This would be due to the fact that she has changes her creative methods according to each theme of her works. Fujinami employed the technique named photo-montage as one of the methods which were used in her new creations. She immigrated to the United States in 2003 and since then she has been taking photos to be used in her creations in the country. Therefore, most of the scenes which are used in her works are not familiar to viewers who live in Japan. Nevertheless, such unfamiliar landscapes give us modest and transparent images in spite of their fantastic and narrative aspects. I wish to walk freely around the scenes which are depicted in her works like a wanderer. (Translated by Nozomi Nakayama) 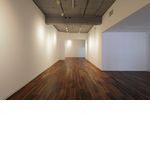